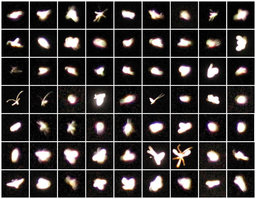 Full body manifestations are a rare occurrence. These are images of a recognizable human (or, sometimes, an animal) in which the subject appears either partially or fully formed or can be somewhat transparent (at least in part.) In some cases, the figure is clear enough to be readily identifiable by the deceased's friends or family if they were present at the time of the manifestation. Full body manifestations are a valuable piece of evidence if captured on film.

Full body manifestations usually appear quite on photos or in person (a human like you or I visually see the apparition with our own eyes) Many apparitions have been sighted with one’s own eyes and look as real as any living person. Some have been known to hold conversations with people and even interact, but then will suddenly disappear. It has also been reported that certain odors have been smelled prior, during and after the sighting of an apparition. Apparitions are not limited to people, there has also apparitions seen of animals, cars, ships, trains, carriages, etc.. Simply put, an apparition is something that we see, that may be transparent, that appears and may suddenly disappears in front of our eyes or walks through solid objects like a door or a wall.

A Cloudy vaporous mist it is associated and referred to as a mist or fog, and it usually displays a swirl effect within a vaporous cloud. It normally appears several feet off the ground and can linger or travel quickly at will.  Ecto has been caught on both video & all types of cameras. Vapors/clouds/mists are believed by many to be the soul or spirit of those that have passed on from this life. It has been speculated that the spirit will transform to this vaporous state before appearing as a full-bodied apparition. It's important to note however, that there are many other causes for this a occurrence too. A camera can inadvertently create this effect artificially in cold weather by a person exhaling to close to the lens when taking the picture. The exhaled breath looks similar to ectoplasm but without the swirls. There are other various things and anomalies that are explainable that could inadvertently cause vaporous appearing clouds or mist too.

Orbs are the most photographed anomalies captured on film by paranormal investigators. They most often show up as transparent or translucent balls of light hovering above the ground. It used to be considered a prize photo if the photographed orb/s would show up on film with an inner substance and a spot(nucleus or brain) within the substance. We are finding out now however, that some digital cameras will produce false orbs with these characteristics and they can no longer be counted as authentic. An impressive feature is when they are captured on film with a lingering trail. or the pattern or direction of the orb is varies and changes flight pattern. Some experts say that 85% of photographed orbs are created inadvertently by circumstances and weather conditions and other external factors at the time of the flash.  I, and many others in the field, now discount “orb” evidence all together. The only point upon which scientist and many paranormal investigators agree upon now is that an orb is energy that is a condensed form (ball) of energy. It may be paranormal in it’s nature and it’s origins and actions may not be explainable, but nonetheless it has not been proven in any way that it is a ghost or spirit.


The most common form of an orb in photos and videos are due to the way digital cameras and digital video equipment work. Since the replacement of film photography and video with digital has become of common use, there has been a 10 fold increase in the "capturing" of orbs. I think this fact alone speaks volumes about how digital cameras function and the orb type anomalies people are now seeing. Maybe not all, but a significant amount of what users claim as orbs are really just camera error or the settings on it not right for the circumstances under which the photo was taken. Many various type of light "anomalies"  are mistaken as ghost orbs (the spirit/energy of deceased humans).

Other common commonly sighted orbs that have real causes, but are often misidentified are: moisture in the air you breathe (that isn't visible to the eye), or dust or insects.

​
Besides orbs there are other light anomalies that do have some reasonable explanations that are geological and/or are meteorological in nature.

Ball lightning:  is a rare event that wasn't even officially recognized by the scientific community until fairly recently. Although it is now considered  a real event by the scientific community, not much has been done yet in the way of studying it, but I'm sure more will be forthcoming. Ball lightning is sometimes referred to as a plasma ball.  Ball lightning doesn't actually have to be shaped like a ball. In fact many times it is not. It can range in size from small to very large 8-10 feet in circumference. It can be white, diffused white light, or colored red, bluish, green like.This process is a combination may be the result of of incandescence and luminescence (excitation of nitrogen gas in the atmosphere) and/or fluorescence in which methane gasses are released from the ground. Another related cause that can occur is when the geological makeup of the ground has magnetically charged minerals in it or formed in it that have also been known to discharge, causing balls of light similar to earthquake lights. What causes the discharge was not known.


Earthquake Lights: Light phenomenon like this has just recently been recognized by the scientific community. For many years, sightings of earthquake lights were dismissed by the serious geology community. Earthquake lights occur at earthquake fault lines, and before, during or after an earthquake has occurred. These lights are caused by gases being released from the ground and interacting with atmosphere in an electrical static way. The lights can take many different shapes, forms, and colors.Common forms of earthquake lights include bluish flames that appear to come out of the ground at ankle height; orbs of light called ball lightning (see above) that float in the air for tens of seconds or even minutes; and quick flashes of bright light that resemble regular lightning strikes, except they come out of the ground instead of the sky and can stretch up to 650 feet (200 meters). various theories have been proposed for how earthquake lights form, including the disruption of the Earth's magnetic field by tectonic stress and the so-called piezoelectric effect, in which quartz-bearing rocks produce voltages when compressed in a certain way. Now reports state that what causes earthquake lights appears to be an entirely different electrical process. When nature stresses certain rocks, electric charges are activated, as if you switched on a battery in the Earth's crust. The types of rocks that are particularly given to the phenomenon are basalts and gabbros, which have tiny defects in their crystals. When a seismic wave hits, electrical charges in the rocks may be released.The charges can combine and form a kind of plasma-like state, which can travel at very high velocities and burst out at the surface to make electric discharges in the air. Those discharges are what make the colorful light shows.


Another cause of mysterious lights often seen in forested areas are one caused by decaying organic matter. Small eye sized lights can also sometimes setoff by insects nipping at this matter which will then cause a glow of light for a bit. These lights are red, green, white, or red. Furthermore fungus react this same way and can also become illuminated. This process is called bioluminescence and chemoluminescence

Below are some examples of what the processes in science are called:
Thunder Lightning: This a relative of Ball lightning and only occurs in the atmosphere in the sky and caused by electrostatic charges that may relate to atmospheric lightning. At any given time above above our atmosphere and out of our sight in the Earth's stratosphere,  there can be around 2000 lightning storms/strikes occurring. We just don't see them and are occurring regardless to what our atmospheric weather is. This process is a combination of incandescence and luminescence (excitation of nitrogen gas in the atmosphere)